TAKE THE COURSE » THE MATRIX OF CONSCIOUSNESS

The Matrix Of Consciousness 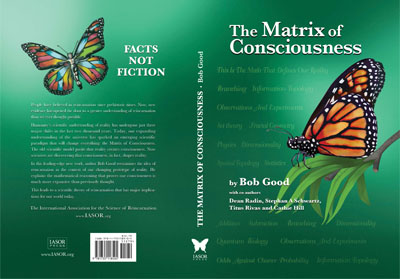 The Matrix of Consciousness is a scientific look at consciousness in all its manifestations. In many of its manifestations it transcends the 3 spatial dimensions and the one temporal dimension that define our everyday reality. This book is about how new discoveries are changing how we view ourselves and our impending deaths. In our evolving view of consciousness and reality, our death most likely means being born into a different state of cognition. This matrix of consciousness introduces a new real science, the science of reincarnation, which is incorporated into this emerging matrix as part of the information and spatial topology. The upload and download of consciousness after death and before birth is a fractal of the upload and download of information to the cloud. The old scientific model posits that reality creates consciousness. Scientists are now discovering that consciousness, in fact, shapes reality. In this cutting-edge work, author Bob Good reexamines the idea of reincarnation in the context of this changing prototype of reality. He explains the mathematical reasoning that proves consciousness is much more expansive than previously thought and that it exists in four spatial dimensions. This leads to a scientific theory of reincarnation that has major implications for the world today.

The Matrix of Consciousness is the mathematical analysis of the structure of what happens to consciousness after death. This analysis upends traditional beliefs about death. Written with leading experts in the field of consciousness science, this proves religious belief in an afterlife but homogenizes it, because if it exists here, it exists there, and there is no “right “religion. This conclusion is reached through the scientific method, both proving an afterlife but disproving blasphemy, celibacy, and apostasy mathematically, as well as redefining Sharia and canonical law in light of this new scientific information. While its initial premise is examining reincarnation using the scientific method, its ultimate goal is redefining the matrix of consciousness and its subsequent ramifications. This mapping of the fourth cognitive dimension effects the military, AI development, and real estate in the Middle East, as well as the rest of the world. This book is a sales presentation/marketing plan of an emerging transcendent science, which will change societal and business norms. This book is broken into three parts. Part 1 uses the scientific method to examine reincarnation mathematically and the resultant change of global cognition. Part 2 explains why this is personal to each reader. Each subgroup of readers has to be given reasons to support this change of cognition and why it is important to them personally. Part 3 is the business proposal itself, the Consciousness Moonshot Business Proposal, a funding request for $450 million for consciousness science, written with Dean Radin and Stephan Schwartz, to address the coming threats that affect all of mankind.