THE MATRIX OF CONSCIOUSNESS 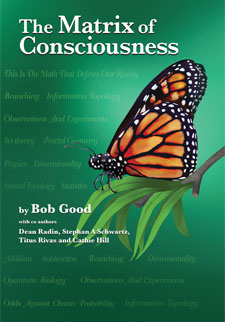 TAKE THE COURSE: THE MATRIX OF CONSCIOUSNESS

The Matrix of Consciousness is a scientific look at consciousness in all its manifestations. In many of its manifestations it transcends the 3 spatial dimensions and the one temporal dimension that define our everyday reality. This book is about how new discoveries are changing how we view ourselves and our impending deaths. In our evolving view of consciousness and reality, our death most likely means being born into a different state of cognition. This matrix of consciousness introduces a new real science, the science of reincarnation, which is incorporated into this emerging matrix as part of the information and spatial topology.

THE SCIENCE OF REINCARNATION

REINCARNATION, NO LONGER A BELIEF BUT A TRUE SCIENCE.

Why? Cutting edge discoveries in micro physics, psychology and quantum biology are proving our minds ability to reach beyond our bodies and our deaths.
This is real science-cutting edge science written for the common man.
Just as discoveries in the 20th Century took us from a world of horse drawn travel to a world of space travel the results of today’s exploratory experiments will take us from the idea that death ends our consciousness to the idea that your consciousness will survive your own death. That the afterlife is really that period between lives.
You will read about children studied at the University of Virginia who are between the ages of 2 and 5 who claim to have lived before and when taken to the families they say they are from those families agree these children are who they claim they were in their prior existence.
You will read about science experiments done at Princeton University that prove your mind can reach beyond your body.
You will read about government funded studies at Stanford University used successfully to spy remotely using psychics and the physicists who ran those experiments are convinced that this psychic ability is real.
Just the thought of accepting that reincarnation can and should be a science has far reaching geo political, social and religious implications.
Easy to read, easy to follow, and staggering in its implications with an extensive source list to facilitate more in depth research by you the reader. The results will both redefine and blow your mind.

THE APPLICATIONS OF THE SCIENCE OF REINCARNATION 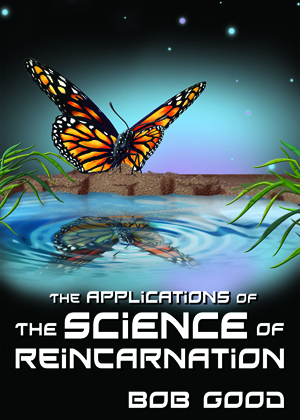 TAKE THE COURSE: APPLICATIONS OF THE SCIENCE 1.0

THE ROLE OF LABORATORY ANIMAL SCIENCE
IN THE SCIENCE OF REINCARNATION

This is a scientific paper explaining how the science of reincarnation should be done within the lab animal community. It advises major pharmaceutical companies how to incorporate this science into their studies and how this science can skew their existing experiments and how to protect against that corruption of their experimental results.